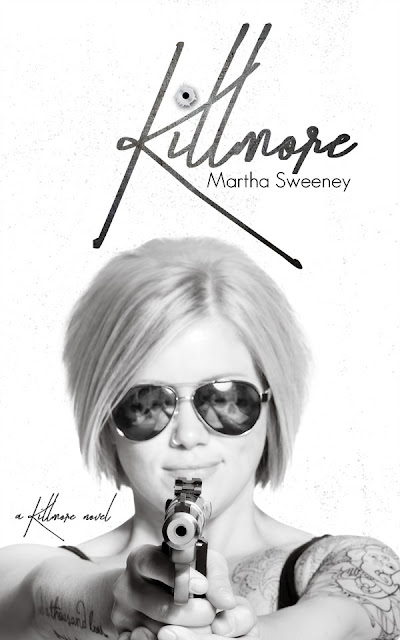 
You know how they say the enemy of your enemy is your friend? Well, I’m still determining if there’s any truth to that statement.

I was used by the Feds to report on the dealings of Antonio Herrera – the major Mexican crime lord since his uncle passed, leaving everything to Antonio. I knew everything about Antonio’s business. How, you ask? I was the only woman he kept close, really close – he claimed he loved me. You get to see and hear a lot of interesting things when you hold that kind of status.

Now, the Feds have me in what they claim is witness protection. However, I never feel safe, knowing he’s out there. My family thinks I’m dead. All the while, I keep to myself, avoid most people in my new hometown, and train rigorously everyday – waiting for the time when the devil comes calling for his debt to be paid.

PICK UP Killmore for only .99cents!

I have been creative since she was little, always drawing, coloring or making crafts. When my adult life kicked in, my creative outlet disappeared until I discovered Adobe Creative Suite products. During my ten years in the special needs community, I became a self-taught graphic and website designer. While helping my husband with the publication of his book, The Harem, my desire to write emerged.

I’m an Amazon Best Seller in the Bisexual Romance section for my first novel of the ‘Just Breathe’ series, ‘Breathe In’ as well as for the entire ‘Just Breathe’ trilogy and aspire to be a self-published author on the NY Times and USA Today Best-Seller lists.

During my journey of becoming a self-published author, I noticed that there wasn’t/isn’t a full training course that supports authors at every level of the self-publishing process. The skills and tips and tricks I didn’t know, I scoured the internet to learn as I began to start writing. After I got many questions from fellow self-published authors wanting to know how I did and do the things I’ve done as an author, I created Bibliobules.com, an online and live event community for authors, bloggers and readers which also has an Author Mentorship Program.

Aside from the books I’ve already published, I have at least ten (10) in my head to share. Some will be standalones while others will be series. I hope that you enjoy the characters I create and the stories of their lives.

I can’t dive into this book until we talk about the outside of it… look at that damn cover!! How beautiful is that woman? I mean, she looks LETHAL!! And fierce!! And sexy!!! This has got to be one of the best book covers I have seen in a while plus it’s black and white... classy! The real Laurie is exactly the book Laurie!!! If you don’t know what I’m talking about check out Martha Sweeney’s post on Goodreads!

I seriously love Leia (Laurie). I love that she was able to take her power back from an abusive husband. There isn't much more an abusive, controlling man hates than having to share his wife with someone who removes all your power. I mean, wow, Jack… what a pansy!

OMG, Laura and Aiden are adorable! I can't help but laugh at the scene after they changed a light bulb… “I'll give you a kiss if you let me go.” Plus all that your fingers are crossed and time limit stuff and Paul's comic relief! I really didn't expect the humor in this book but man... it is funny! Besides being funny, this book is super suspenseful. It was a book that I wasn’t able to put down, I dried my hair while reading on my phone. It is unputtdownably awesome!!!

For as much as this book is funny, sweet, and adorable… it’s twice as fierce! Laurie is one kickass woman! Just like everyone else in this book, I didn’t know who to trust. My mind was everywhere and everyone, except the two leads, were guilty. I was very excited to see that this is a part 1 because I NEED more of Laurie and Aiden… I need more of the secondary characters like Trudy and even Codie.

I received an ARC in exchange for an honest review.

Posted by Next Book Review at 5:00 AM