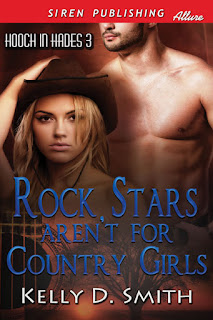 
“I wondered if you’d be here.”
His voice sounded like silk, but it made her heart skip a beat. She spun to face him, her mouth hanging open.
“I—what are you doing here?”
“I came to see you, obviously.”
She raised an eyebrow, trying to keep cool.
“I figured it would be a safe bet to check the same bar again. I mean, you are on the event card, aren’t you?”
Her eyes widened. Of course flyers were all over the place promoting their show tonight, but she hadn’t expected him to actually notice that. She took a deep breath and smirked.
“Funny, I thought you were on an event card tonight, too.”
He laughed. “I am. I just told my friends I might be a little late. Of course, I’ll still get there before I have to be on stage. I wouldn’t make my fans wait.”
“That’s kind of you.” Anna looked him over for a fraction of a second, then held her hand out to him. “Anna.”
“Adam.”
They shook hands as his eyes roamed over her body.
“I guess you knew that though, didn’t you?”
“Nope. I had no clue what your name was.” And she hadn’t. She wasn’t a fan of the kind of music he played, at least she was guessing she wasn’t considering she’d never heard one of his songs before. As far as you know, she thought.
Adam’s smile widened. “You didn’t?”
“Nope. I saw a poster for you yesterday, that’s the only reason I recognized you.”
He let out a soft laugh. “Well, I’ll be damned.” His smile widened as James brought Anna’s drink over.
“Thanks.” She gave him a quick smile.
“Bell.” Despite the fact he used his nickname for her, Jesse didn’t sound happy. Anna’s body tensed as she turned to him. “I’ve got some bad news.”
Her eyes widened as she saw the look on his face. “What is it?”
“Mike won’t be able to make it.”
“What?” Anna snapped.
“He’s sick. He’s been puking all day. We didn’t want to say anything until we were sure he wouldn’t be able to make it, but he just went and doped himself up on cold medication.”
Anna groaned. What were they going to do? “Great,” she muttered. They’d have to cancel it. There was no other option for them. Anna ran her fingers through her hair. I’ve got to find someone who can replace him. Maybe someone I know…. No, she’d know if there was someone. Anyways, they’d have to learn all the songs for the set list.
It just wouldn’t work.
Anna blew out a deep breath. She could feel the stress inching to every part of her body, her muscles tensing.
“Who’s Mike?”
She’d totally forgotten that Adam was there. She took a deep breath, trying not to sound too disappointed. “He’s our bassist. And if he’s sick then there is no way we can play tonight.”
“You know...” Adam grinned widely. “I do happen to play bass.”
Jesse stared at him with wide eyes. “You do? Well, could you—”
“No,” Anna cut him off. “He can’t. He’s playing with his own band tonight. Hooch in Hades, was it?”
“Oh, I’ve heard of them.” Jesse mulled it over. “Donna’s kid is a big fan of them.”
“What time are you playing?”
“Nine,” Jesse answered before Anna could.
Adam bit his lip, a movement that sent a shiver down Anna’s spine.
“And you’re on for an hour?”
“Yes.”
“I’d need a ride right to the venue, but I could probably do it.”
Get your copy of "Rock Stars Aren't for Country Girls" HERE

Posted by Next Book Review at 8:20 AM