AUDIOBOOK REVIEW: The Girl Most Likely by Jana Richards 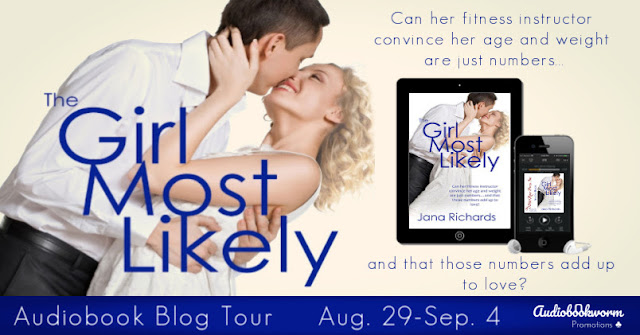 Cara McLeod, the girl most likely to have the perfect marriage, is now divorced and, in her own words, "fat, frumpy, and over forty." The thought of facing former classmates - and the ex-husband who dumped her - at her high school reunion terrifies her. Cajoled into attending by her kids and her best friend, Cara enlists help at the gym to lose weight and look great for the reunion. Personal trainer Finn Cooper is more than willing to help - but does he have to be so to-die-for gorgeous?

Finn thinks Cara is perfect just the way she is. She's everything he wants in a woman, except for one thing - she can't get past the fact that he's eight years younger. To Finn, age and weight are just numbers. But can he convince Cara the numbers she worries about add up to only one thing for him - love?

When Jana Richards read her first romance novel, she immediately knew two things: she had to commit the stories running through her head to paper, and they had to end with a happily ever after. She also knew she’d found what she was meant to do. Since then she’s never met a romance genre she didn’t like. She writes contemporary romance, romantic suspense, and historical romance set in World War Two, in lengths ranging from short story to full length novel. Just for fun, she throws in generous helpings of humor, and the occasional dash of the paranormal. Her paranormal romantic suspense “Seeing Things” was a 2008 EPPIE finalist, and in 2018 “Lies and Solace” won Best Contemporary romance in the I Heart Indie contest.

In her life away from writing, Jana is an admin assistant, a mother to two grown daughters, and a wife to her husband Warren. She enjoys golf, yoga, movies, concerts, travel and reading, not necessarily in that order. She and her husband live in Winnipeg, Canada with their geriatric Pug/Terrier cross Lou. Jana loves to hear from readers and can be reached through her website at www.janarichards.com

Hedbor is an amateur historian, linguist, brewer, fiddler, astronomer and baker. Professionally, he is a technologist, marketer, writer and father. His love of history drives his to share the excitement of understanding the events of long ago, and how those events touch us still today.

Originally from Vancouver, BC, Canada, Leigh spent her twenties doing voice-over work and writing radio and TV copy for Palmer Jarvis Advertising. She was a theatre critic for 14 years for a Vancouver newspaper and has extensive experience working in "Hollywood North." With a B.A. in English, and 3 years of acting and directing classes, Leigh studied the Stanislavski Method of character acting. She now lives on a secluded lake near Austin, Texas and is a freelance narrator for all genres of fiction and non. Her work is on Audible and i-Tunes.

The Girl Most Likely is probably one of the most relatable audiobooks I have ever listened too! I'm 37 years old and might be weighing more than I did when I graduated high school. The things that bothered Cara don't bother me as much as they did her. I feel like we all change after 20 years. We've had kids, if we can. We've packed on more pounds or at least we don't like where our weight is sitting. The boobs no longer sit as high as they did 25 years ago.

I think seeing the ex with a younger woman would be was would get me. I would want to stick it to him. You know, look at what you're missing buddy. Yeah' his 25 year old girl friend might have breasts 3 inches higher than mine but older women have a different confidence. They have a bit more understanding of life and dare I say we know what's happening between the sheets! So obviously Finn knows what's up!!

Anyways, sorry I got a bit hung up on Cara and her inner battle to be comfortable in her skin and with who she is. I loved Finn and I'm so happy the author made him a real man and not just some body builder man of gym perfection. He's had his own struggles and really seems to respect Cara for wanting to fix what shes unhappy with. What starts as a friendship builds into more but they still have that deep rooted friendship that helps them talk through their personal fears and struggles.

The narration was done by Leigh Linley. I felt she did fine with Cara but Finn wasn't the best. There was also a slight echo sound to the sound. It was a bit distracting. Really though, seeing this narrators name on another audiobook wouldn't turn me off from the story. I enjoyed it for the most part.

I received this audiobook as part of my participation in a blog tour with Audiobookworm Promotions. The tour is being sponsored by Jana Richards. The gifting of this audiobook did not affect my opinion of it.

Songs that could be in the soundtrack for this book

5. “Scars to Your Beautiful” by Alessia Vara

7. “Fallin’ For You” by Colbie Caillat

8. “Start of Something Good” by Daughtry

One of the central problems in my novel “The Girl Most Likely” is that Cara is eight years older than Finn. The age difference bothers her to such an extent that she at first refuses any kind of relationship with him. She’s afraid of looking ridiculous for pursuing a younger man, and afraid that one day he’ll wake up and realize he was no longer attracted to her.

Though relationships between older women and younger men are becoming increasingly more common, there are still issues that such a couple must face to make their relationship work. First, let me explode a few myths, courtesy of Susan Winter, co-author, with Felicia Brings, of "Older Women, Younger Men: New Options for Love and Romance". She and her co-author interviewed more than 200 couples. Although this is not a scientific study, three myths kept popping up:

Myth #1: ”He’ll leave you for a younger woman.”. Winter says they didn’t find one man who did this, at least not for a specific younger woman. In some cases the man wanted children and the relationship fell apart as a result.

Myth#2: “The older woman is always the seducer – a Mrs. Robinson.” In all the cases that Winter studied, the man was the initiator.

Myth #3: “It will never last.” The average length of the relationships that Winter studied was 13 years.

Psychologists and dating experts believe that though age may be factor in determining whether a relationship will work, there are other factors that may be of greater importance.
My couple in “The Girl Most Likely” eventually figure out that for them, age doesn’t matter. They learn that the things they have in common far outweigh their differences. Love, it seems, is ageless.

Jana Richards: Sit down right over here, Finn and make yourself comfortable. Everyone wants to know a hero.
Finn Cooper: I’m just a regular guy. I’m no hero.
JR: Why don’t you let me be the judge of that.
FC: (shifts uncomfortably) That clipboard of yours is making me nervous. How many questions are you planning to ask?
JR: Just a few. Shouldn’t take long. Do you have someplace you’ve got to be?
FC: (checks his watch) I have to meet Cara McLeod at the gym in an hour. I’m her trainer and she counts on me. I don’t want to be late.
JR: We’ve got plenty of time. Sounds like Cara is important to you.
FC: (squirms in his chair) All my clients are important to me.
JR: But perhaps Cara is more important than most.
FC: Perhaps. She’s a wonderful person.
JR: Where did you meet her?
FC: (grins) At the TV station where she works. I was being interviewed on Rochester Noon, a local live information show. Cara got roped into doing a live demonstration of my fitness assessment on air by the host. She made Cara do jumping jacks, and was about to have her weighed on live TV before I stepped in to stop her. I could tell Cara was uncomfortable. But despite being embarrassed, she kept her dignity.
JR: And you think you’re not a hero! I’d say saving her from the embarrassment of being weighed in public is pretty heroic. What was your first impression of Cara?
FC: That she was beautiful, and strong and determined. She was someone I wanted to get to know.
JR: So did you ask her out?
FC: I wanted to, but it didn’t seem right to hit on her at her workplace, in front of all her co-workers. Besides, she hardly gave me a second look. I didn’t think she’d want to go out with me.
JR: So, what did you do?
FC: I gave her a coupon from the gym for some free training hours with me. (winces) I know, I know. It occurred to me later that giving her a coupon for the gym was like telling her I thought she needed to work out! But I really wanted to see her again and it was the only thing I could think of! I’m really lame when it comes to women.
JR: But she did come to your gym.
FC: Yeah, eventually. She has a high school reunion coming up and she wants to look her best. Especially since her ex-husband is going to be there. Looking good for her ex is very important to her. I think she wants to show him what he’s missing.
JR: Good for her! Why do you think you’re lame with women?
FC: Because it’s true! When I want to get to know a woman, I get nervous and don’t know what to say, and then I usually say the wrong thing. I don’t have a lot of experience.
JR: Wait a minute. You’re saying you don’t have a lot of experience with women? Have you been hiding in a monastery or something? Most women would do backflips to have you notice them. Look at you. You’re gorgeous, all rippling abs and buns of steel.
FC: Yeah, well I didn’t always look like this.
JR: What do you mean?
FC: There was a time when women didn’t give me the time of day. That’s why I don’t have a lot of experience with…dating.
JR: Really? Tell me more.
FC: (Getting to his feet) Sorry, Jana. Interview’s over. I’ve got to get to work.
JR: You mean you’ve got to get to Cara.

From the Heart of a Bibliophile Lair

What Is That Book About

➜Sign up as a host here
Posted by Next Book Review at 6:00 AM